“How do we live well?” has become a guiding question for Karim Rizkallah since a housemate asked it on a kitchen floor one evening many years ago. As a Jack of some trades, Jill of others, and Master of none, Karim dabbled in a variety of studies and travel for a decade or so until his path led to Toronto, where his wanderlust faded and his love of community building grew, always trying to answer that question.

There he worked at the Centre for Social Innovation for almost a decade, connecting deeply with the co-working pioneer’s sharing culture, human centered design, grassroots financial innovations, and most of all an incredible community of people.

Karim has lived in a series of increasingly intentional community homes in several countries, most recently co-purchasing a house with five friends in Toronto.

Drawing from many sources of wisdom and his own experience, Karim goes over the themes that have been most interesting, challenging, surprising, and frequently asked about around coliving, cohousing, and intentional communities generally, such as: people, communication, governance, finances, trust building, conflict, re-examining priorities, and humility. 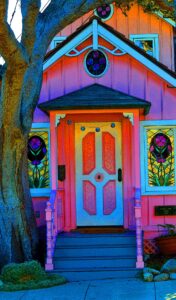